Situated amidst the many remarkable suburbs of Phoenix, Arizona’s West Valley, you will find a vibrant community known as Litchfield Park. This hidden gem is often overlooked and overshadowed by the larger cities of Tempe and Scottsdale, but it affords all the natural beauty and charm you would expect to find in the Valley of the Sun. Litchfield Park is one of the smallest cities in the sprawling Phoenix Metro Area, with a population of around 5,500 residents, but it has shown sustained growth since 2000. The growth that took place between 2000 and 2010 is attributed primarily to the completion of multiple new condominium complexes. During that period, the population almost doubled.

Despite its small size, Litchfield Park holds its own among the well-established East Valley cities, and like Surprise and Goodyear, Litchfield Park has added restaurants, shopping centers, and other sought-after amenities to serve its growing population. The city is an excellent choice for prospective homebuyers desiring the luxury, entertainment, and culture of a large city with the close-knit, small-town charm of a smaller hometown. In proximity to Litchfield Park, the shopping opportunities include Peoria’s Arrowhead Towne Center, which boasts more than 170 stores and restaurants. And in Glendale’s Westgate Entertainment District, also in proximity, are the Tanger Outlets for shopping, and the University of Phoenix’s stadium, which is home to the Arizona Cardinals. Additional points of interest nearby and easily accessible to Goodyear residents are the Phoenix International Raceway, Goodyear Ballpark, the spring training home for the Cleveland Indians and Cincinnati Reds, and many recreation destinations.

Because the city is close to the foot of the White Tank Mountains, residents can easily spend a day picnicking, camping, hiking, biking, and horseback riding. The abundant sunshine makes it easy to enjoy these opportunities, as well as other Litchfield Park destinations, such as the World Wildlife Zoo and the historic Wigwam Resort. Established in 1929, the Wigwam is perhaps for what Litchfield Park is best known. It is located in the heart of the city and encompasses 440 acres, which include numerous restaurants, comprehensive spa services, a large swimming pool, and three eighteen-hole championship golf courses. Near Wigwam, there are many exceptional Litchfield Park neighborhoods and subdivisions from which homebuyers will be pleased to choose. Remarkable Litchfield Park real estate can be found in communities such as the Village at Litchfield Park, Litchfield Greens, and Dreaming Summit, among many others. Homes for sale in Litchfield Park include attached and detached properties in all shapes and sizes, and because of this diversity, listing prices fall across a vast range. If you would like to learn more about available properties in Litchfield Park, Arizona, we would love to assist you, so please contact us at your earliest convenience.

Great floor plan in a great neighborhood! North-south exposure with no neighbors behind. Single story homes on each side for privacy and security. *New* Paint and *New* f...

Great OPPORTUNITY on this SPACIOUS, SINGLE STORY, 3 bedroom 2 full bath with a LARGE and easy to MAINTAIN BACKYARD. Situated in a NICE, quiet and FRIENDLY NEIGHBORHOOD. C...

All I can say about this property is WOW! Welcome to the Elitist's playground! It has everything you and your family and friends want to do onsite! Want to practice your ...

Welcome to paradise ! This Custom Built Home is Luxury at its finest on over an Acre Lot. This Mediterranean home reveals timeless style. Greeted with a 20 foot ceiling i...

This home is an Entertainers Dream! This Impeccable 4 bed, 3 bath property located in Wigwam Creek North is now available! Located on an oversize cul de sac lot with amaz...

Great location, mountain views with plenty of room! This home has soaring 20ft ceilings in the great room, with beautiful railings over looking. All rooms are spacious, ...

All information should be verified by the recipient and none is guaranteed as accurate by ARMLS. Copyright 2021 Arizona Regional Multiple Listing Service, Inc. All rights reserved. 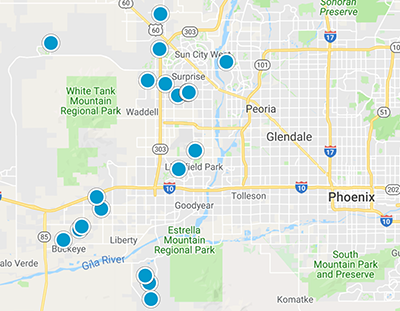 Create Your Own Market Report